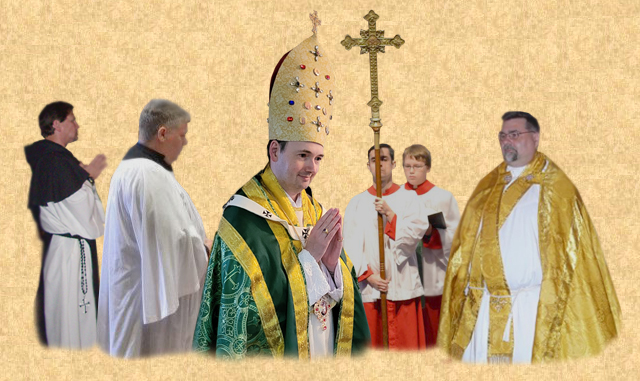 Q: What is the official status of the Imperial Roman Church?

The Imperial Roman Church is an ancient historical entity dating to the Christian Roman Empire and is modernly defined as the Gallo-Russo-Byzantine Catholicate, the Anglican Patriarchate of Rome, and the churches of all Bishops recognised by the Catholicate and Patriarchate. It was formerly known as the New Roman Communion. Bishops of the Imperial Roman Church need not be of the Gallo-Russo-Byzantine Rite, the Anglican Rite, or the Gallican Rite, but may be of any traditional Catholic Rite. Its members may be described as Old Roman Catholic, Old Catholic, or Pontifical Orthodox, or Pontifical Orthodox Old Catholic See also: Historic communion with the Orthodox Patriarchates of Antioch and Alexandria.

The Imperial Roman Church is an autocephalous ecclesiastical sovereignty with an independent government in special consultative status with the United Nations Economic and Social Council through its foundation, the Anglican Rite Roman Catholic Church, Inc. It is a continuation of, as we say in the Holy Mass, the Apostolic, Orthodox, and Catholic Church founded by Jesus Christ in 33 AD.

Also, the church is the temporal successor of St. Peter the Apostle and thus to the Roman Empire claimed historically by right of the church. The Church by its heritage and rights is fully Catholic and Orthodox, holding the same canonical authority as the Roman Communion (Vatican) and other autonomous Patriarchates. St. John Paul II renounced the temporal claims of the Bishops of Rome other than to the Vatican City, and Benedict XVI renounced the Patriarchal title. The succession to the temporal heritage of Rome passed to the Imperial Roman Church after Benedict XVI by right of Rome and Florence, with the Papa-Catholicos of Rome-Ruthenia with papal authority as temporal successor of St. Peter, and the Pope-Bishop of Rome as spiritual successor of St. Peter and de facto sovereign of the Vatican City-State. From 2021, the traditional and historic Gallican Rite of the Merovingian dynasty is also under the spiritual guidance and protection of the Imperial Roman Church.

Q: Are you a canonical Orthodox and Catholic Church?

Yes. We are a canonical Orthodox and Catholic Church through adherence to the historic and constant faith of the Church as taught by the saints and the Church Fathers (St. Vincent of Lerins) and the faith once delivered for all unto the saints (Jude 3). Neither affiliation with this See, nor with the Bishop of Rome, of Constantinople, or of any other ecclesiastical jurisdiction is required. We accept as canonical all who accept the traditional faith. Those who insist on being members of a particular "church club" (for example, communion with a particular patriarch) act against the unity of Christian people that Christ desires.

A unique heritage and practice of Old Roman Catholicism descending from the ancient Roman Catholic Diocese of Utrecht and the Russian Orthodox, Greek, Gallican, Syrian, Armenian, Chaldean, and Antiochean churches. It is one of the descriptive names of the faith and the membership of the Imperial Roman Church and is under the pastoral leadership of the Supreme Pontiff of the Imperial Roman Church.

Q: Why is it called the Imperial Roman Church? Why Pontifical Orthodox Old Catholicism?

First, because it is our heritage -- Roman (latin and byzantine), both orthodox and catholic. Also because it speaks to the nature of the church. It was during the Roman Empire that the church was born, and the faith spread by Roman roads. The Christianization of the Roman Empire allowed the church to flourish far and wide. Indeed, the empire was geographically vast, spanning from east to west and north to south. It was ethnically diverse and with multiple religions. We promote the faith regardless of nationality, location, heritage, or ethnicity, and we promote religious tolerance. It is the principle of the earlier unified Church that we encourage through our name.

Pontifical Orthodoxy or Pontifical Orthodox Old Catholicism (both names mean the same thing) is our confession. It refers first to our Apostolic heritage, coming from both orthodoxy and latin catholicism. The word "pontifical" refers to union with the Imperial Roman Church and also speaks to our promotion of the faith that is both eastern and western, regardless of nationality, location, or ethnicity. Although there is a central shepherd of the Church in the person of the Papa-Catholicos, the church is decentralized. In fact, unlike the Vatican Church, those bishops and their churches that are not canonically in the Gallo-Russo-Byzantine Catholicate or the Anglican Patriarchate follow their own specific practices and canon law.

Q: Are other churches or governments formally affiliated with the Imperial Roman Church?

No, except where explicity stated. Although administratively independen and sovereign, the Imperial Roman Church embraces as brethren other Catholic, Orthodox, and Anglican bodies, such as the current Roman Communion (commonly referred to as the Roman Catholic Church), the Anglican Ordinariate, Eastern Orthodox Churches, and the Anglican Communion. The governments of the modern republics of Italy, German, France, Switzerland, Russia, Belarus, Ukraine, and the United States, and of the modern kingdoms of Great Britain and Spain, as well as the European Union and all other civil states, are not affiliated with the Stato Pontificio government in exile or the Imperial Roman Church.

Q: What is the difference between the Imperial Roman Church/Patriarchate/Catholicate and the Vatican Church?

The Imperial Roman Church is traditional Rome and the historic Pontifical States, as well as the Gallo-Russo-Byzantine Rite, the Anglo-Roman Rite, Gallo-Roman (Gallican) Rite, and the Anglican-Byzantine Rite. The modern Roman Communion is the Vatican City and the Vatican Church.

Q: Who is the head of the  Imperial Roman Church?

The Papa-Catholicos of Rome-Ruthenia.

Q: Is there more than one Pope/Papa?

Yes. It is a popular myth (maybe spurred on by Hollywood mystique and institutional arrogance) that the only Pope/Papa is the Bishop of Rome (head of the Vatican Church). In fact, the first to use the honorific was the Patriarch of Alexandria, not the Bishop of Rome. Today there are two claimants to the Alexandria Patriarchate, one Coptic and one Byzantine. Pope/Papa simply means "Father" and is even a common way of referring to priests leaders in certain religious communities in Greek and Slavic languages.

Q: What is the Gallo-Russo-Byzantine Rite?

The Gallo-Russo-Byzantine Catholicate is a continuation of, as we say in the Holy Mass, the Apostolic, Orthodox, and Catholic Church founded by Jesus Christ in 33 AD. (Website of the Catholicate.)

Gallo-Russo-Byzantine is a descriptive term refers to the heritage, succession, and Apostolic lineage and authority of the Imperial Roman Church. It also constitutes a distinct rite derived from several ancient Christian rites, especially the Ruthenian-Byzantine and the Roman. Its members may be described as Old Roman Catholic, Old Catholic, or Pontifical Orthodox, or Pontifical Orthodox Old Catholic. The church's heritage spans the historic Roman Empire, from Spain and Britain in the west to Russia in the east; from northern Gaul to north Africa and the middle east. Its apostolic authority is Roman Catholic, Russian Orthodox, Greek, Gallican, Syrian, Armenian, Chaldean, and Antiochean. The Anglican Rite was formed from a combination of the Gallican Rite (in Gaul and Spain, but of Byzantine origin) that was present in Britain and the Roman rite brought by St. Augustine of Canterbury.

Q: What is the Gallican Rite or Gallo-Roman Rite?

A: The Gallican Rite, associated with the ancient Merovingian Dynasty, has been under the spiritual authority of the Anglican Patriarchate of Rome since 2021, as well as the Gallo-Russo-Byzantine Catholicate. The Gallican Rite is not a single rite of the Church, but instead is an ancient collection that came into use at least before the 5th century and is associated primarily with Roman Gaul and Western Francia (modern-day France). The neighbouring Iberian Rite was similarly used from the 5th century in Roman Hispania (modern-day Spain). The Iberian Rite was so linked with the Gallican Rite that they are often referred to jointly as Hispano-Gallican. In fact, the territories of the Merovingian Dynasty are widely associated with Spain as well. Also used to describe the Rite is the term Gallo-Roman. The Gallican Rite is also associated with Italy, particularly the areas of Piemonte and Lombardia in the north, as well as Tuscany and Sicily/Naples -- all areas that were historically associated with France. (Website of the Catholicate.) (Website of the Gallican Rite.)

Q: Why is the Archfather also given the honorifics of "Papa" and "Holy Father"?

Although Archfather is a title, other honourifics are commonly used. The honorific of "Papa", always in its Latin form, is used frequently in front of the Archfather's name and simply means "Father." It is of Roman and Byzantine origin. Also, the Archfather is sometimes known as the Papa-Catholicos, the Florentine-Roman Papa, the Florentine-Roman Pontiff, or the Holy Father, among others.

Q: Is the Papa-Catholicos a counterclaimant to the Pope-Bishop of Rome?


Q: Is the Papa-Catholicos a counterclaimant to any of the other Orthodox Patriarchs?

A: No. Although they share the same origins and soures, the ecclesiastical authority of the modern Papa-Catholicos of Rome-Ruthenia (Florentine-Roman Papa, or Papa-Catholicos) is distinct from any claims made by the other Orthodox Patriarchas and Catholicoi around the world, including Constantinople, Moscow, Alexandria, and others.

Q: What is the authority of the Papa-Catholicos?

Q: Does the Imperial Roman Church teach and profess Catholic and Orthodox doctrine?

A: Yes. In particular, our principal Catechisms, the Southwest Anglo-Catholic Catechism (also known as the Catechism of the Anglican Rite Roman Catholic Church) and the Pontifical Orthodox Old Catholic Catechism, are based largely on the Baltimore Catechism, a standard catechism of the Roman Catholic Church before the Second Vatican Council. As Pontifical Orthodox Old Catholics who received and inherited the true doctrine of Catholicism and Orthodoxy, the Imperial Roman Church preserves that doctrine, as well as the seven Sacraments of the Holy Mass, Baptism, Confirmation, Holy Orders, Penance, Matrimony, and Unction.